The morning (about 10:00 am) at our house was filled with a lot of commotion and kee-aahs as two red shouldered hawks flew in circles over the trees and our house. The female landed on a large branch in the cottonwood. The male did his “sky dance” as he sang and flew in large circles. The big bird descended and flew close to the female then rose up as he soared in another wide circle around the tree only to drop back down near the female.. and once again spiraled up. The screaming of the bird was intense. He obviously was on a mission. The bird performed his fancy maneuver a few more times before he plummeted down and landed…. right on top of the lady. Wow. It was quick, they fluffed their feathers and each took a separate branch and faced different directions. 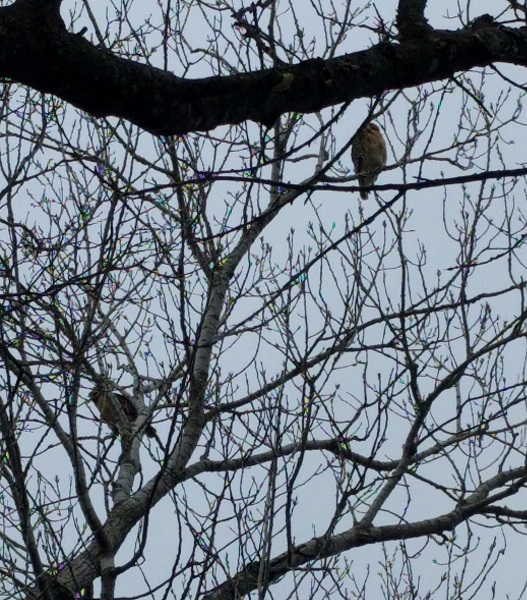 Hawks in cottonwood after!!!

When a friend saw the picture, he commented “You can tell they mated…they aren’t talking to each other anymore…even looking in opposite directions; looks like there is some disappoint there….”

Who can figure out birds other than the obvious, or maybe not so obvious. We tried to figure out if the woodcock would show up anywhere around the 640 acres that contain the monastery ruins at Sacred Heart in SE Pottawatomie County. The group gathered at St. Gregory’s Monastery at 5:00 pm ish and looked at the sky. The temp was 37 degrees and dropping, winds were over 10 mph from the north and our area had just been placed in a Winter Weather Advisory for freezing rain and fog. It was one raw afternoon. The trip to Sacred Heart would take at least 40 minutes or… ..we could drive to Tecumseh Lake in 10 minutes and wander along the edge of the fields across from the lake. 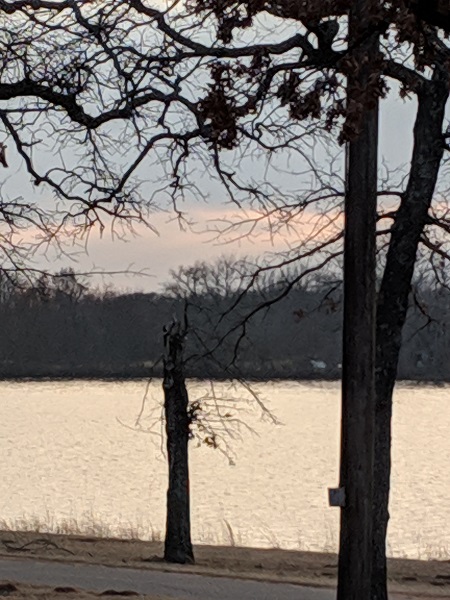 Can you see the woodpecker on the truncated trunk (Left)?

Timberdoodling at Tecumseh Lake it was. We arrived at the water’s edge at 5:45 pm. Care to guess how cold the wind was coming off the water? We saw no birds. The birds were smarter than us. Slowly moving around to prevent freezing, the birds finally showed up, but sporadically and moving fast: 6 Mourning doves, 1 Northern Cardinal, 7 American Robins, several red-winged blackbirds trilling from

the reeds and grasses by the water, a flock of at least 2 dozen juncos, some unidentified sparrows (one member quipped he saw little brown birds), one small hawk, probably a Sharp-Shinned hawk, pursuing prey, and 2 male mallards chasing a female mallard. Best of all, a red-headed woodpecker was busy excavating the top of a truncated tree by the water’s edge. That red head stood out in the gray murky atmosphere and made the trip worthwhile.

At 6:30 pm we walked along the road toward the water treatment plant, carefully listening to sounds from the open fields dotted with a few small redcedars. This was a good area east of Tecumseh Lake. Woodcocks like moist soil with earthworms. Straining our ears, a distant peent or squeak sound was heard periodically, but the traffic noise from I77 interfered. No bird was ever spotted doing the sky dance into the air, but the consensus was we may have heard the woodcock. 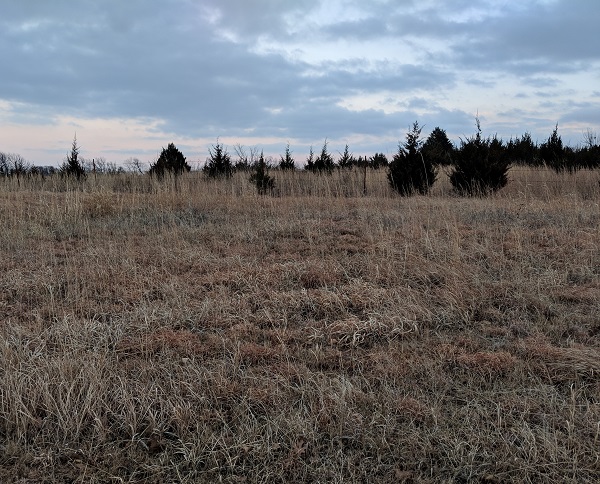 Where we think we heard the woodcock.

Hey, it works for us! Good birding trip. The freezing mist began falling as we returned to Shawnee. Dinner at the Phoenix Restaurant. Good timing, hot tea and hot soup!

Last reply was 10 months ago