Posted on 5 April 2017 by DeaneandBecky 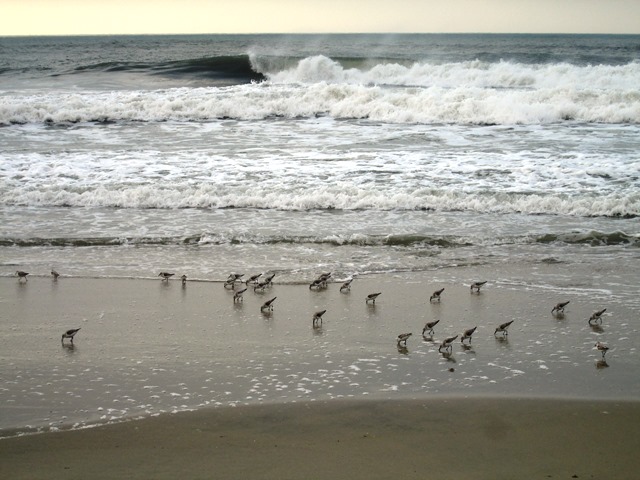 The Outer Banks (OBX) of North Carolina is the place to be in early spring. The mosquitos have not resumed control of the airspace yet. Birds migrating along the Atlantic Flyway bird migration route either pass directly over the barrier islands or find places to rest at the beaches, the forests of the coasts or the marshes.  The resident birds don’t seem to mind.  North Carolina has spent years developing a concentrated network of birding trails from the mountains to the coast.

The living room and kitchen of our small third floor condo at Hatteras Village faced the Atlantic Ocean.  Every day you could watch the small Sandpipers and larger Sanderlings running back and forth as the waves flowed in and out.  “Obsessive wave chasing” states Cornell.  Assorted gulls would float, dive or fly above the water.  Boat-tailed grackles hopped through the brush on the dunes and washed up debris on the shore.  Dolphins and whales that spouted large plumes swam beyond the breakers in the deeper waters.

Buxton and Frisco Woods are considered a natural maritime Atlantic Coast evergreen forest community.  They have fresh water ponds, sand dunes, grasses, thickets and coastal vegetation.  Several paths traverse the sandy soils that support the loblolly pines and live oaks.  American holly, wax myrtle, yaupon, greenbriers, grapes and poison ivy form the underbrush.  The native Carolina Jessamine vine was in brilliant bloom.  Its clusters of yellow tube flowers could be seen wherever dashes of sunlight hit their living trellises; plants the evergreen vines climbed to get to the top and more light.  The flowers are toxic to the non-native honey bees, but the native bumble bees love the blooms.  In other words, there is ample food for birds and other wildlife.

My goal was to find waterfowl.  We looked at the Hatteras Lighthouse before driving down the road to find the path to the Open Pond and British Cemetery.  In 1942 a British tanker was hit by 7 torpedoes shot by a German U-Boat cruising just off Cape Hatteras.  Half the crew drowned, but two washed ashore and were buried in the Buxton Woods.  The fenced mini-cemetery is considered British Territory.  The Open Pond was reported to be home to a variety of birds.

After two miles of walking down the pine root and needle strewn sandy path, we found ourselves at the Open Pond.  It was a swampy, tree-filled area of stagnant water.  The only things flying around were pine warblers, red-winged blackbirds, Carolina wrens, a few turkey vultures, dragonflies, bumblebees and small butterflies. Had we had the time to cover the entire wooded and coastal area, we might have seen Ruddy Turnstone “Calico Cat” ducks, different dabbling and diving ducks, kestrels, Northern Harriers, plovers, terns, avocets, sandpipers, gulls or any of the nearly 400 species that live at OBX. The Laughing gulls giggled overhead as we ended our frustrating search.

After I threw a small fit, we regrouped, grabbed sandwiches and drinks in Avon, and drove 30 miles north to Pea Island National Wildlife Refuge.   It was about five in the chilly afternoon with a fierce north wind. What birds in their right mind would be hanging around the large ponds and wetland areas.  Guess again. Two mated pairs of Northern Shovelers (ducks with large, scooped bills; the males have green heads and are patterned in russet and white), 25 Gadwalls or American Black ducks (both resemble female mallards from the distance where I was standing), 3 brown pelicans, 5 snowy egrets, 4 coots, the ubiquitous red-winged blackbirds, 15 Canadian geese, one juvenile Tri-colored heron and two pair of Bufflehead ducks.  So cool.  Bufflehead males have deep greenish purple heads with stark white patches at the back of the head, white necks and bellies.  The females have whitish cheeks.  The ducks dive out of sight, only to pop up later in another place.  No Tundra swans, white pelicans or snow geese were present.  The large birds had departed very early from the refuge a month ago. 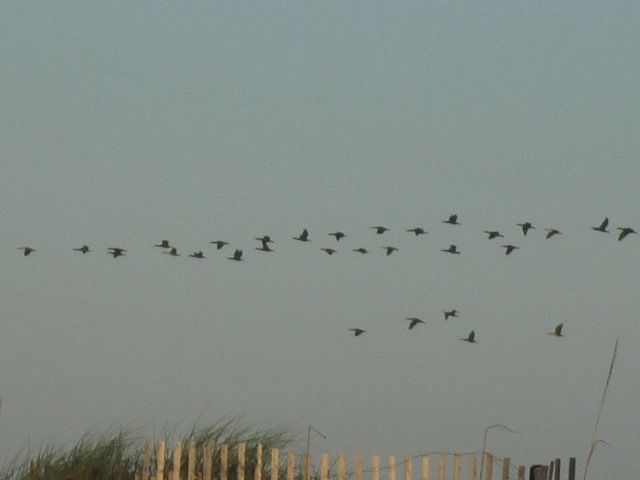 Double-crested Cormorants flying over the dunes

Two hours later we began to drive back south to Hatteras Village.  The sun was setting.  Suddenly hundreds of Double-Crested Cormorants in V formations began crossing over Highway 12 flying west.  Their flashing yellow bills were the only bits of color that could be distinguished as the long necked birds flew in formation.  This lasted over 20 minutes.  Breathtaking.  They fly to the Atlantic each morning and return to the bay every evening.

The next day was a trip to Ocracoke Island via car ferry.  The destination was Springer’s Point Nature Preserve.  This 122 acre tract was saved from development and is now owned by the North Carolina Coastal Land Trust.  Its mission is to enrich communities of the state through acquisition of open space and natural areas, conservation education, and the promotion of good land stewardship; much the same way as Nature Conservancy works.  Springer Point has one mile of water frontage along creeks and the Pamlico Sound, two large creeks, canals and small streams as well as upland habitats.  Twisted live oaks and Southern red cedars (closely related to our red cedars) formed the backbone of the evergreen maritime forest that once covered the entire island.  The trees provide nesting sites for the egret, ibis and heron. The nature walk area is thought to be haunted.  Blackbeard liked to hang out here and odd unexplained lights are occasionally seen.  A tiny cemetery houses old Samuel Jones who died in 1977 and his horse Ikey D. They each have their own gravestone, but Ikey D’s is carved in the shape of a horse. Some early mornings people have seen lone horse tracks leading down the path.  There certainly is an atmosphere about the place 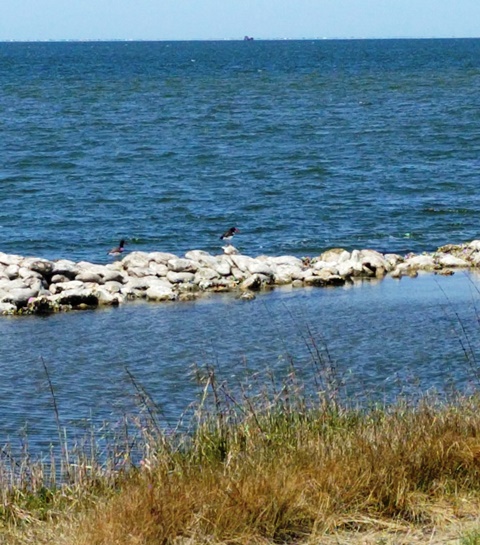 Can you find the American Oystercatchers?

Yaupon hollies, wild olives, needlerush (a type of junco grass), southern red cedars and live oaks dominate this preserve.  Oyster shells are being hauled in to be used as fill to build up and anchor the coastline.  I only saw Herring and Laughing gulls hovering above us. But wait.  We drove to the inlet and walked out to see the Civil War Monument by the public boat ramp facing the sound.  Two good-sized birds with large bright orange-red bills and bold black and white markings were busy investigating the water between the loose rocks that formed the riprap stone barrier. They were American Oystercatchers.  These shorebirds mate for life and return to the same place to nest each year.  The pair was foraging for mussels, clams and other creatures that live in the intertidal zone around Ocracoke.  What a great find.

On the trip back to Hatteras Island, the ferry was escorted by dolphins and ever present Laughing Gulls