The Birds of the Land Run

Posted on 16 March 2017 by DeaneandBecky 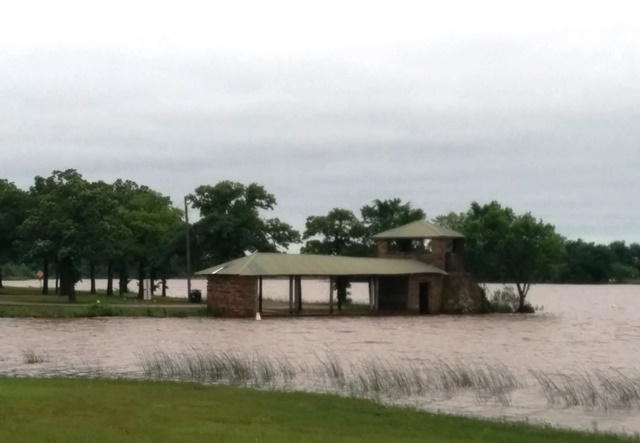 The Tower at Lake Tecumseh. after the May storms 2015.

The selling points for Lake Tecumseh are boat ramp, grills, picnic area, overnight camping, a pavilion, a playground and 3 miles of shoreline surrounding 127 acres of water. A small dam is located in the northeast corner.

The “Tower” is a landmark building in the picnic area built by the Civilian Conservation Corp (CCC).  This organization provided jobs, shelter, clothing and food for young men during the Depression. In return the workers helped develop the natural resources in rural areas.    From a satellite’s perspective, Lake Tecumseh appears as a statuesque face, facing left, with sculpted hair, prominent lips and a short pig tail at the back of the head.  A long neck extends to a truncated bosom.   The profile could have fit in with the other 887 statues on Easter Island.

The Deep Fork Audubon Society had decided to have a field trip last Saturday morning at Lake Tecumseh.  Although the weather was predicted to be cold and rainy, the rain stayed to the north, but strong cold winds came south.  The air flowing over the water made the forty five degrees feel like below freezing.  Even our binoculars and the birding telescope were shivering. The greatest difficulty I had was holding my binoculars in my mittens while trying to keep the Hot Hands from falling out!

Despite the uncomfortable conditions, we managed to see four cormorants coast right above the surface of the water.  Double-crested Cormorants are larger black water birds with long necks.  They hang around our area in the winter to do a little fishing.  Our ornithologist spotted 19 Ring-necked ducks on the other side of the lake…with his telescope.  The male duck wears a striking black and light gray feather coat, does have a faint chestnut neckband but much more noticeable are the two white bands around its bill.  The female is tan, but also has a faint ring around her bill, the reason why these diving ducks are also called ‘ringbills’. Keeping their distance were three Gadwalls.  Gadwalls resemble Mallards in size, but have low-key grey-brown coats and white wing patches.  They like to steal food from other diving ducks and were probably just floating-in-wait until the ringnecks caught fish.

My best find of the day was a Yellow-bellied or rumped warbler.  The little insect eater was streaked in yellows and dark browns and stayed on the left side of the oak tree.  Three bluebirds had taken over the other side.  Spunky Dark-eyed Juncoes foraged for seeds on the ground under some trees and a Great Blue Heron flew overhead.

The Great Blue Heron  look and sound so prehistoric. They not only wade in the water, but walk in fields and pastures.  The birds can quickly strike their prey with pointed bills or crunch them with strong mandibles.   Not only fish, but small mammals, reptiles, amphibians, and other birds are all fair game.  The Great Blues hunt both day and night as they have good night vision.

Somewhere in the background trees, the White-crowned Sparrows delivered sweet clear whistles ending in trills.  Crows, no doubt pestering something, squawked in the distance.  A hawk, possibly Cooper’s Hawk, soared above us, but vanished before we could get a positive identification.  Of course there were the dozens of sparrows that flew in tight formations throughout the shrubbery.  Other birds were present, but we left them to go on their own merry ways.

Tecumseh was one of the early towns created during the seven land runs of the “Unassigned lands” in what was later to become the state of Oklahoma.  Stretching from 1889 to 1895, sections of Indian Territory composed of Native American lands were opened to homesteaders on a first come basis.    Tecumseh was a Shawnee Chief and military ally of the British during the Revolutionary War.  His name meant “Shooting Star” or “Panther across the Sky.”