Posted on 1 February 2017 by DeaneandBecky 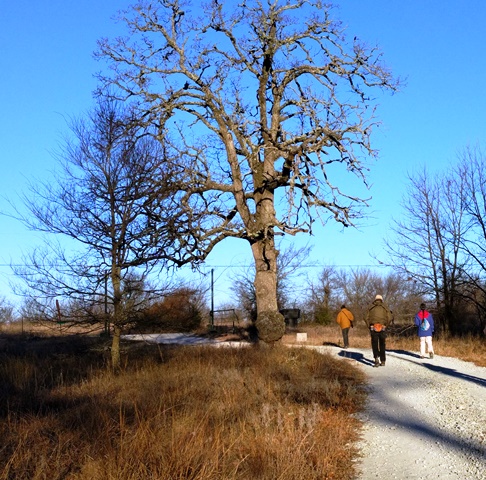 The Start of the Bird Count

Our small group rendezvoused in the dark at six in the morning at St. Gregory’s University.  It was a cold start, but warm car.  The sun began to climb into visibility as we drove to Pontotoc Ridge just south of Ada.  This property of the Nature Conservancy covers nearly 3,000 acres of prairies, woodlands, exposed rocky outcroppings and wetlands with caves, sinkholes, the forest of Cross Timbers and even cacti.  It has a wild diversity of plants and animals, but the focus of our trip was to use our eyes and ears to look and listen for birds.  It was time for the tenth annual bird count held every January.

The usual problems at Pontotoc Ridge involve errant cedar trees, feral hogs, or, from my point of view, ticks. A new concern has now been added.  The Diamond Spring Windmill Farm is setting up shop in Pontotoc and Johnson counties.  Guess where the Nature Conservancy property is?  The farm is expected to generate 300 megawatts of power and slated to be in operation by 2018.  Naturally the firm has done its environmental survey and reported there would be little impact.

Let’s see.  Odds are there will be more than one hundred wind mills aka wind turbines.  The term wind mill sounds so quaint.  One thinks of the Netherlands, tulips, canals, wooden shoes and cheese.  These wind turbines may be 300 to 400 feet tall, with their bases of steel rebar anchored down by thousands of tons of concrete that was poured inside an excavated circle of soil 30 to 50 feet across and 6 to 30 feet deep. Each turbine can weigh over 200 tons.  All trees around each one are removed for max wind generation.  Additional roads must be built for the semi-trailer trucks as they haul in the enormous blades, machinery and other parts.  Ever see windmill parts going down the Interstate? 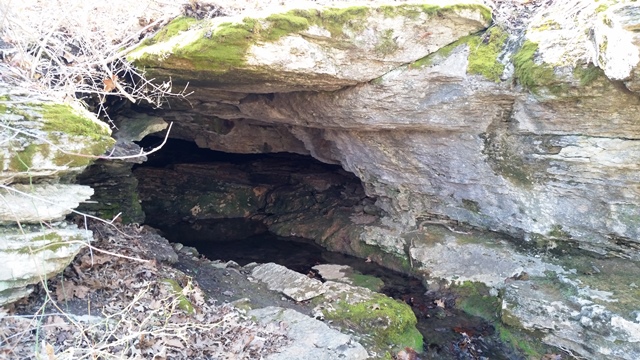 While living in Germany, we watched the construction of a wind mill farm along the main ridge outside our village of Jettenbach.  The turbines were aligned to harness the prevailing wind. Germany has seriously gone into wind power to lessen their dependence on fossil fuels. It is a good idea.

We villagers noticed every so often a blade would be thrown far away, and one or more turbines usually needed some kind of maintenance at any one time.  This was not nearly as exciting as the ice.  It would form on the blades when the weather was cold and moist and hurled like daggers into all different directions.  The whomp, whomp, whomp sound was continuous and the enjoyment of walking through quiet woods was forever gone.  Only when the blades were feathered down or stopped due to excessive/lack of wind was there ever silence. Computer operated wind-harnessing electricity generating machines, when built in the right places, are fantastic power sources, but when constructed in impoverished areas that have minimal sustainable wind speeds, the perspective takes on a different spin. Get it?  Generate power and jobs. It’s a heck of a compromise with nature. Wind farms certainly alter the landscape in both appearance and function, from low below the ground to high pie in the sky.  Little impact?

Got a tad off track…. 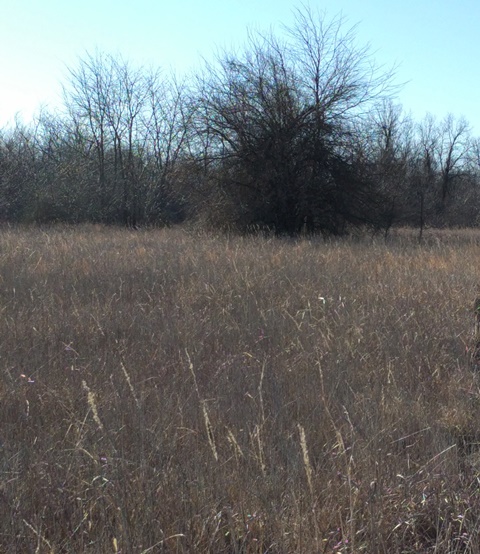 Jona Tucker is the Pontotoc Preserve manager who has been in charge of the bird count every year.  Professors, students, trained bird watchers and those who simply love birds gathered and were divided into groups inside the preserve headquarters. Each troop was given a clipboard with the list of expected or anticipated birds.  After grabbing some water, coffee, doughnuts, fruit and candy bars, everyone departed to start their morning observations.  We were all to report back to headquarters around noon for some hot tasty chili, crackers, cheese and dessert. 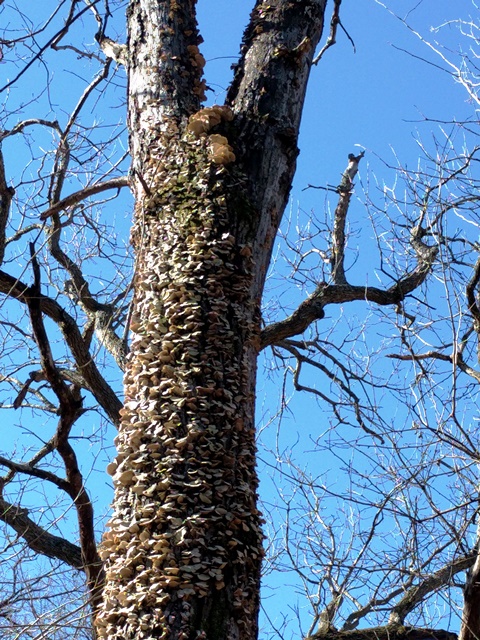 A Dead Tree with Shelf Fungi

Our trail paralleled the unpaved county road before branching off over the prairie, past clumps of prickly pear and small outcroppings of rocks, up and down over more rugged terrain with disguised rocks covered by leaves, and along the edge of the ridge. Cross Timbers trees looked at us from the other side.  Carefully going past the rickety old bench, we then took a left and plunged into the woods, walking under the leafless canopies and by tree trunks sprouting leafy mushrooms some call turkey tails. Each fungal “leaf” had faint rings in delicate contrasting earth tones.  The schrooms could have been polypores with tiny spore releasing holes under their caps or smooth bellied crust types, but I didn’t get close enough to look.  Thing is, these thin bracket/shelf-like mushrooms do look like turkey tails (use your imagination.)   We found the spring fed cave with cold, clear water running through it, walked to the side of one small sinkhole and finally arrived back at headquarters.  In the open areas were sparrows, brown thrashers, blue jays, cardinals, chickadees, titmice, wrens, goldfinches, kinglets, juncos and other feathered friends with crows or the occasional turkey vulture flying overhead.  The woodpeckers dominated the Cross Timbers forest but smaller birds zinged through as well as one red-shouldered hawk. We heard “who cooks for you” from the Barred Owl as its call echoed through the trees.  Included in our tally of 33 species were 8 turkey vultures, 10 red-bellied woodpeckers, 16 chickadees, 23 juncos, and 2 elusive but very cool LeConte’s sparrows.  Diverse bird population, yes, but quantity, no.  There seemed to be token representatives of many species but we did not see the flocks as in previous years. 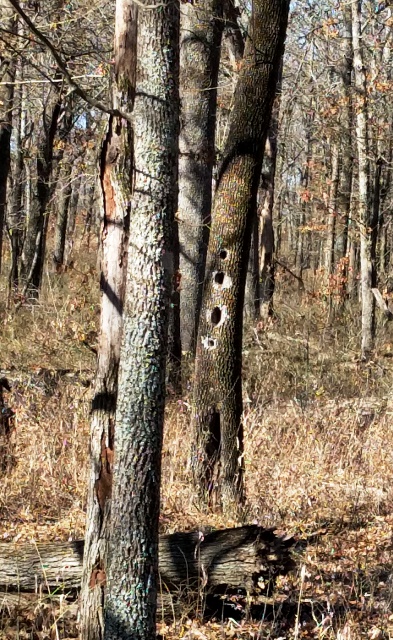 Headquarters soon filled with birders (aka Twitchers in the UK) grabbing bowls of steaming delicious chili, handfuls of Fritos and crackers, fruit, drinks, cookies and brownies. Each group reported its results (one saw 55 species but no one encountered waterfowl).  We watched the presentation of “Oka’Yanahli and Pontotoc Ridge Preserves Avian Detection Surveys.”  It focused on reasons for the decline of migratory bird populations.  For example, certain grassland species have decreased over 40%.  Two surveys were done in early spring and summer at the Preserve using the small Rufous-crowned sparrow and Cassin’s sparrow.  Eight pairs of Rufous-crowned sparrows were observed, but no hide, hair nor feather of a Cassin’s sparrow were seen.

What a day. Wildlife surveys are so very important.  Volunteers help determine an approximate number of species present in a given area.  This allows comparisons to past levels, which may predict the direction of the species’ future.  Surveys can be used to distinguish species not at risk from those that are endangered and, sadly, the ones whose numbers so dwindled they became extinct.  We must uncover what is now happening so strategies can be implemented to slow or stop future declines.

To all:  Oka’Yanahli will have their bird count this February 11th.  The twentieth annual Great Backyard Bird Count, supported by Cornell Lab of Ornithology and National Audubon Society, will be held February 17th-20th 2017. Find out details of the GBBC at:  birdcount.org.  Become a citizen scientist and do it for the birds!