Posted on 13 December 2016 by DeaneandBecky 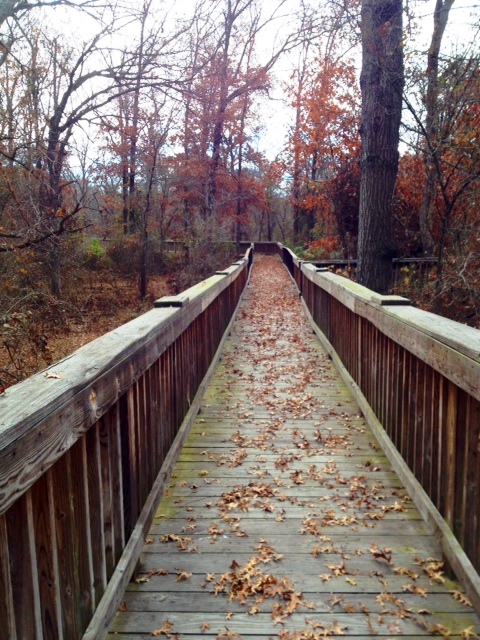 Boardwalk to the wetland outlook

Deep Fork Refuge is composed of patches of wetlands, swamps, forests and oxbow lakes.  The oxbows are readily apparent if looking down at the Deep Fork River from an airplane.  The winding river appears as a serpent undulating across the landscape.  The refuge is home to over 250 species of birds and 50 species of animals. It was established in the mid 1990’s and is governed by the U.S. Fish and Wildlife Service.  The refuge is constantly on the lookout to acquire adjoining lands in order to expand the sensitive wetlands habitat.

The Cussetah Bottoms Boardwalk Trail is part of the National Recreation Trails program.  The trail is composed of sections of boardwalk, asphalt, temporary rock layer that replaced the washed out part of the trail, and concrete.  The easy hike begins outside the refuge headquarters, is less than a mile in length and loops back to the headquarters.  There are two wetland overlooks and the area can remain under water many months of the year.  Not now.  It is very dusty and dry. 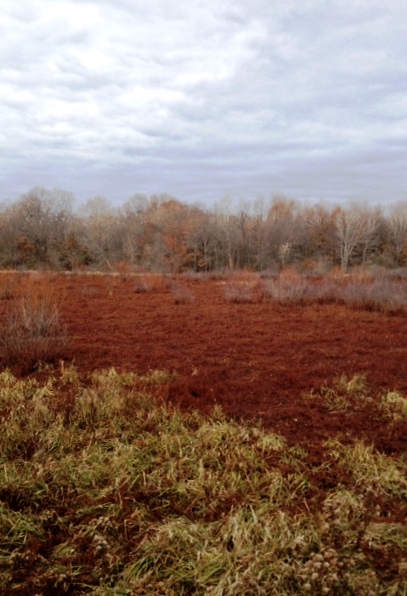 Our group decided to first hike through the woods to the Deep Fork River, which did have running water.  The forests of the bottomland are covered in pin oaks, burr oaks, pecans, sugarberries (hackberry species), elms, willows, hickories, and other trees.  The rapid purrs of the red-headed woodpeckers, the trills of the red-bellied woodpeckers, the squeaks of the downy woodpeckers and high-pitched meows of the yellow-bellied sapsuckers formed an orchestra of birds that surrounded us.  On the edges of the woods and the open fields of grass were the bluebirds, goldfinches, white-throated, song and field sparrows, cardinals and blue jays.  Smacking their bills overhead were turkey and black vultures.

Our return was via the boardwalk where we caught a glimpse of a brown thrasher eating berries deep inside a bush. A female rusty blackbird mesmerized us as she padded around a muddy ditch, tossing a small fish into the air, letting it drop back into the mud, taking a bite, flinging it back up, down, eat, repeat…..until she eventually finished off her fish meal and flew to a nearby tree.  Eastern towhees, my favorite Oklahoma State University bird mascot, were singing to each other as we walked back to the headquarters. 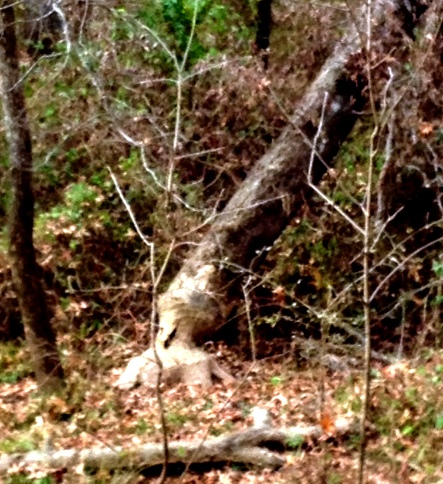 The next trail was out at the Okmulgee Wildlife Management Area northwest of Okmulgee. Our caravan of vehicles drove through and out of town.  Kestrels, the smallest falcons, were observed by two sharp-eyed birders on the way.  We assembled in the parking lot.  Suddenly a Cooper’s hawk dived through the trees.  Oh my. We started walking down a mowed path bordering a low, wide ditch that encircled the field.  The Killdeer were hanging out in the mud and grasses.  Two of us spotted a swamp sparrow with its rusty tail and gray breast.  Stephanie was the first to identify the female red-winged blackbird in a small tree.  As if on cue, the other twelve or so soon joined her.  Female red-winged blackbirds tend to flock together according to Donald.  To me, at a distance they looked like song sparrows on steroids.  A pileated woodpecker sent out its wook wook wook sound that sings prehistoric creature in my mind.  Big beautiful bird it was.

In both parts of the refuge we saw trails, narrow and wide.  The narrow paths to water were more likely made by beavers.  Wild boars were responsible for the wider, churned tracks.

Isn’t it funny that people can live cheek and jowl in their neighborhoods and that is considered acceptable, but too many beavers crammed together in an isolated habitat because the people have destroyed  most of their neighborhoods are thought of as pests. At the Okmulgee Wildlife Area we saw evidence of beaver activity and one lodge under construction.

A greater problem lies with feral hogs.  They can truly damage wetland areas.  These escapees from domestication are clever, secretive and smart.  The omnivores roto-rooter their way through the woods and fields.  A mother sow can produce 6 babies each time.  Thus, their numbers are booming.  Blame the Texans, or Hernando de Soto. When his party arrived in 1542 in what was to become Texas, they brought with them 700 wild pigs that were released.  The piggies were looked upon as a future food source.  So, why aren’t we having wild pig bacon, roasts, spare ribs, and other delicacies?  It is reported the dark red meat is flavorful, a little stronger and sweeter with the hint of nuts, and very lean.

A market should be developed for the wild pig.  The wildlife refuges would benefit as they struggle to create a balance of nature and not be overrun by pigs.  It would reduce the need for factory farmed pigs.  Would it dent the intensive pig factory farming industry’s grip on pork?  Think of it.  Pigs that can run and be free before being roasted.  How humane.

Thanks to Angela and Trevor for taking the time on a weekend to guide our group. This was one of our best field trips!