Posted on 24 August 2016 by DeaneandBecky

At the gate on County Line Road

Stinchcomb Wildlife Refuge was the venue for our birding expedition.  The last time we tried this, unbeknownst to us, it was the first day of duck hunting season there.  The season started later in our area here, so we were as surprised as the ducks.  You can just figure out the rest of the story and how many birds we saw.  I will say we should have counted the number of trucks pulled off the muddy roads here and there and heard gun shots around us as we walked down along the lake.  Does seeing two decoy ducks floating in water count?

The 1,000 acres of Stinchcomb Refuge is northwest of OKC proper and has a section of the North Canadian River meandering through it.  The refuge was named after Lee Stinchcomb who participated in the 1889 land run and settled on 160 acres by the North Canadian River. A point of interest: Lee Stinchcomb and Fred Bailey, an engineer, owned land where Silver Lake, at the very northeast corner of the Stinchcomb acreage, now stands. The lake was built by Stinchcomb’s 3 sons.  One son bought out Bailey and put a fence with gates around the lake.  In the 1930’s he began to sell 1 acre plots where people could build cabins.  Those cabins have morphed into very substantial McMansions at some locations, but it is reported a few original cabins still survive. 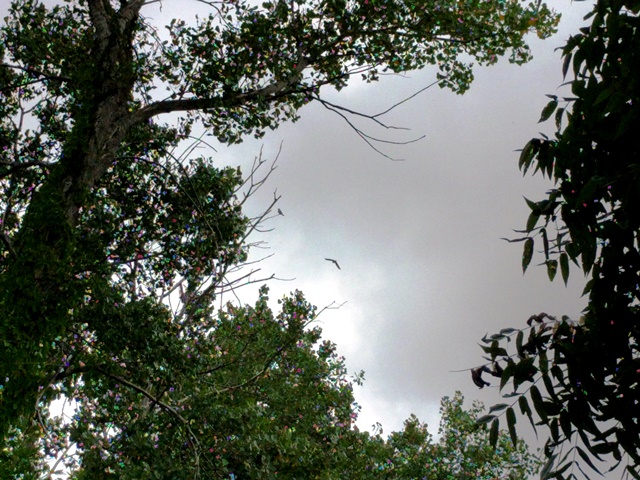 The Refuge is bordered by Route 66 to the south, W Wilshire Blvd to the north, to the west by the John Kilpatrick Turnpike and east by N Council Road. In spite of the major roads enclosing the nature area, it is remote and wild and…..right now very dry, except for the North Canadian River.  The Stinchcomb Lake is a large mud flat as are the smaller swamps and marshes.  One low area is completely covered in cockleburs. The sycamores, oaks, wild grapes, sumacs, and other plant life still abound and the River was full of people floating in kayaks.

Despite the lack of water, we stood by one tree and watched over 30 Eastern Kingbirds as they dove in and out of grape vines, gorging themselves on ripe fruit.  A few starlings had flown in with the American robins that were flitting from tree to tree.  We heard Indigo Buntings and had a possible Painted Bunting sighting.  The barn swallows soared and twittered over our heads joined by chickadees at the lower levels as we walked down the dry dirt road.

If there were any waterfowl, they were either digging a well for water or hiding in the tall grass waiting for heavy rains.  Turning around, we decided to drive to the other part of Stinchcomb Park Wildlife Refuge by Bethany High School Athletic Complex.  After parking close to the North Canadian River, we walked over and saw a strikingly brilliant white Great Egret on the opposite bank.  The bird was standing motionless, watching each kayak float by.  We headed toward the park and counted eight circling Mississippi Kites that entertained us while they chased insects. Mourning Doves and goldfinches hid in the trees, ragweed, sunflowers and grasses.  Following the road to a path leading to the river netted few birds for us to see, but the turtles and poison ivy looked healthy. 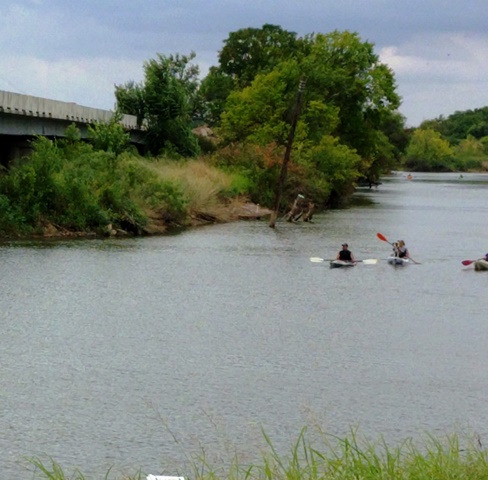 It was a cool, cloudy morning, perfect for being outdoors. We discussed out next outing slated for October 22nd to be held at our namesake Deep Fork National Wildlife Refuge near Okmulgee.  On August 24th, we were notified that the Deep Fork muzzleloader hunt starts October 22nd followed by archery season, but the refuge will once again be safe for us and the birds after November 18th.  Hey, we learned our lesson with duck hunting season, so our next field trip will be rescheduled!