The Hunt for the Painted Bunting 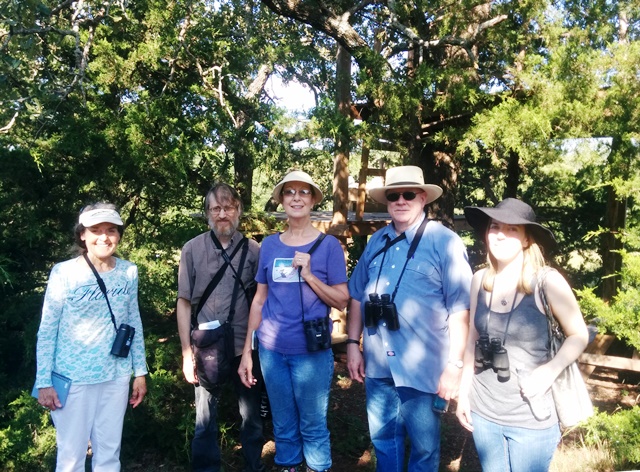 In front of the tri-level tree-house.

Several members of our Deep Fork group assembled at St. Gregory’s early Saturday morning.  When all were present and accounted for, we drove to the outskirts of Tecumseh in search of 18 Oaks.  This was to be our bird-watching site as the sun woke up and began to slowly rise in the clear blue sky.

In front of the long porch were bird feeders, Chinese Pistache trees, Vitex, hollies, Coreopsis, soon to bloom Liatris (gayfeathers) and other bird-friendly plants.  In the corner sat a round-faced man holding a black shotgun.  On second glance we discovered this guy would be just as home in a corn field.  He was stuffed head to toe and dressed in work clothes.  His eyelids sat above circles of white yarn.  From a distance he appeared to have real eyes.  The man’s firearm was a piece of black painted wood shaped like a rifle.  We were told he likes to keep an eye on the property and moves around.  During hunting season, you can find him sitting in different tree stands.

The chairs on the porch were in shade so we could observe the birds without disturbing them.  The goldfinches and male house finches were in brilliant color.  The female house finches were in typical drab camouflage and blended nicely with the sparrows.  An intrepid red-winged blackbird accompanied by a cowbird dropped in for a bite.  The tufted titmouse darted in and out while Northern cardinals sang from the tree tops.  A white-breasted nuthatch came in for a few forays, but soon abandoned the area. Hummingbirds hovered as they tanked up at one of two feeders hanging from opposite ends of the porch.

Time to do a walk-about.  We hiked along a path with black-eyed Susans to keep us company.  Our resident ornithologist quipped there was an easy way to remember Rudbeckia hirta, the scientific name of the black-eyed Susan.  Rude Becky hurt ya, It’s a clever mnemonic and as I recall, there’s more…not only did Susan get a black eye, she was kicked in her ass-teraceae.  The plant family is asteraceae! Right. You should remember this plant now.

We arrived at an amazing three level tree house.  On the first set of stairs everyone had to dodge the tricky tree branch before getting to the platform.  There had been two rubber duckies hanging from that low limb to warn people to “duck”, but the ducks had taken flight.  The next level was accessible by a short ladder and a table and chairs were waiting.  The third ladder took one to the cat perch or crow’s nest, whatever you prefer to call it; a chair all by itself high above in the tree canopy. It had previously been used as a hunter’s tree stand.  We stood at the various heights looking through binoculars aimed in all directions, peering into trees, gazing over fields and scrutinizing the small pond in search of birds.

Back on the ground our group rounded past the brush pile alive with the infamous brush pile sparrows.  Here we heard, not saw, the Indigo bunting.  The bird taunted us as we walked into the former deer pen now filled with delicate asparagus fronds, squash, tomatoes, strawberries, pea vines, watermelon and other delectable veggies and fruits.  The fence had rings of sliced white PVC pipe tied along the top wire to warn the flying birds.  Good idea. The search continued for someone to actually physically see the Painted Bunting, but it merrily sang away well hidden in the trees.  The singing mythical bird was soon joined by the Blue Grosbeak.  This bird was seen and positively identified by several witnesses.  The Painted Bunting and Blue Grosbeak songs are somewhat similar, but the Bunting song is clearer and sweeter. 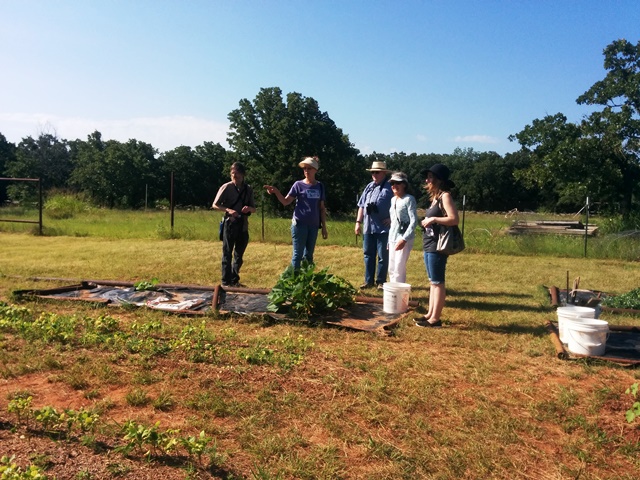 In the deer pen

Our final stop was at the empty Guineafowl Emporium, an elaborate guinea house with roosts, indoor and outdoor play areas, a grass feeding plot and many other amenities.  Many old and young guineas had lived here, but one-by-one they have disappeared. Bobcats, hawks and other predators live in this area as well as roaming stray dogs and cats.  The only dogs are one neighbor’s three chained Labradors. Cruel.

We heard a heart-warming Guinea love story.  Mr. G was constantly chased by another male Guinea while the one female watched from a safe place.  All day long the two males ran about in circles and flew in and out of the trees, until….the tormentor was found dead on the ground without a single mark.  Mr. G and his lady could be together at last.  They made an endearing couple.

We hot bird observers retreated back to the cool shade of the porch to sit and give our feet a rest.  Delicious doughnut holes with a variety of fillings were brought out to accompany the bottles of cool water.  The group discussed birds, hydrated, and got a sugar high while being entertained by the birds flying to and from the feeders.

Our time was growing short and so would be the last hike.  The birders either walked or rode in the golf cart to see the owl house.  It had been designed and built to attract owls. The large box had a platform and was so positioned that if the young owls fell out of the nest, they could use their beaks to help climb back up the tree to home.  The nesting box was positioned on a post oak tree growing at the edge of a small copse of trees.  It faced east toward an open meadow, the direction owls prefer.  Are they Hindu or Muslim?  You recognize these birds at night by their “who cooks for you” call.  No owls have taken up residence yet, but they probably will before the next breeding season.  It’s a lovely home.

We had good weather, enthusiastic bird watchers and a great time.