A Fall of Woodcock (from Becky) 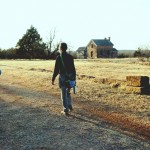 Note from Donald–We visited Sacred Heart on 20 February to watch the woodcock display. Here is Becky’s account of that outing…

This is your climate on steroids. How high can you go. Temperatures have been hitting the seventies and eighties in mid-February with the nighttime lows at fifty degrees. Wow. Our normal day temps should be in the fifty degree range, with nighttime lows at or below freezing. Any bets as to what we might experience in the spring and summer? Not to fear. By next week we swing back into a more ‘normal’ temperature cycle, but will we see any precipitation? Snow?

Friday morning on my way to the Japanese Garden I saw a turtle crossing the road. Further along were black birds spread out across the asphalt surface. As I came closer, the black birds turned into two dozen crows. Did you know a group of crows can be referred to as not only a flock but a murder? Yes, a murder of crows. This possibly dates back to the 15th century, but the origins are hazy. Crows and ravens were often seen at execution sites and cemeteries (sources of food), but folklore has it that crows are territorial and will punish crows that have done terribly bad things or are not from the group. Pretty well not based in fact, but makes for a good story.

Along a similar note, a flock of owls is known as a parliament of owls. Owls look very wise. The owl is the symbol for Athena, the goddess of wisdom. The gaggle of geese is attributed to the noise a bunch of geese make. A group of domesticated turkeys is known as a rafter, but the wild turkeys group together in a flock. Rafter? Nothing pops up, but one naturalist proposes it would take a strong rafter to support a group of turkeys. The wild turkey group has broken up into smaller flocks. A month ago, over fifty turkeys had gathered together and were grazing in an open field. Today I counted fifteen close to my house.

Turkeys do this. They flock together in the winter, but as the spring mating season arrives, the males hang together in smaller groups and start their strutting, booming, drumming and spitting to attract females. You have to love the bluster of a good male turkey.

A collection of woodcocks is called a fall of woodcock. They travel solo or in small groups known as ‘flights.’ The woodcock is the size of a robin, but is disguised in camouflage pattern of russets, browns and blacks. Since the bird savors earthworms as well as insects and larvae, its bill is quite long and sturdy; just right for poking into the soil. This bird that resembles a snipe is another shorebird, as is the Killdeer, who has moved inland. It may not have been a good idea.

The habitat of the woodcock is disappearing as its open fields and woods are developed. The land across from St. Gregory’s University had formerly been prime woodcock territory, where males would perform their courtship dance in the air, followed by mating with the female and the formation of a new family. No more woodcocks can now be seen or heard as houses have covered the area.

Oklahoma, especially the eastern part, has year-round woodcock populations. The number of woodcocks is in decline as their habitats are being destroyed. Wake up people. Conservative development not only cuts the gobbling up of land for its human occupants, but allows preservation of the habitat and homes for wildlife.

Woodcocks like the edges of thickets, cleared areas and abandoned fields with trees ringing the perimeter. The normal singing range of a male is about ¼ acre and the nesting site may be only 90 meters further away. To find our woodcocks, the Deep Fork Audubon Society drove to Sacred Heart, nine miles east of Asher. The site had been a mission established in 1879. An academy for girls, boarding school for boys, convent, blacksmith shop, sandstone bakery, stables and a model farm eventually were built. The mission was destroyed by fire in 1901, leaving only the bakery, a log cabin, foundations of former buildings and a few small structures.

Sacred Heart reverted to a priory, but, beginning in 1910, most things were moving to St. Gregory’s College in Shawnee. The priory closed in 1965. The Sacred Heart Catholic Church, built in 1914 and a short distance away from the mission site, still stands on Bald Hill, the highest point in Pottawatomie County.

The mission site is quiet, with landscaping that stands as testimony of a former community. Thick trifoliate orange (Poncirus trifoliata) hedges still delineate boundaries, and the remaining quince shrubs are beginning to show red blossoms. Pecan groves dominate part of the 640 acre property that also has a meandering creek and a few ponds. 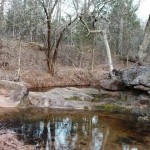 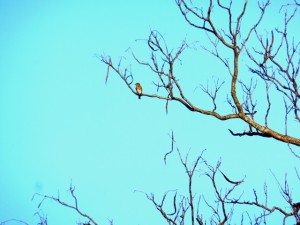 Hundreds of American robins began winging it over our heads, apparently on the way to their night roosting area. Bluebirds, crows, titmice, chickadees, wrens, four-wheelers, motorcycles and woodpeckers were seen or heard. A pigeon sat on the top of the log cabin and watched as we opened, and closed, the gate on our way into the pastureland. The dirt road took us past tall grasses and woods. As dusk fell, we heard the first ‘peent.’

The male woodcock has a spectacular courtship display. In order to attract a cute lady, he has a plan. Either right before sunset or sunrise, he begins his ground display. On the ground the male woodcock emits several peents that sound oddly like a large insect buzzing. The guy then takes off into the air, chittering and twittering away as he climbs higher and higher into the sky. He is into his flight song. At the right moment the bird suddenly begins his rapid descent, chirping into silence as he lands at the same spot he started his performance.

Our male began his show at 6:32 pm. We heard the vibrating peent of the woodcock, accompanied by a chorus of toads, spring peepers and white-throated sparrows coming from the creek and the trees. Another peent was heard further away. Ah, two males in the general vicinity. Our bird then flew into the sky as he chittered constantly, but darned if I could ever see him. Up, around, down, up, around, down he went. The guy peented at 6:37 pm, chittered into the sky, began chirping at 6:38 pm and was done by 6:39 pm. At 6:41 pm he had completed a quicker display. At 6:43 pm I tracked with my ears his chittering and silent fall back to earth. The bird went up again at 6:44 pm after another series of peents, chittered across the sky then chirped downward at 6:45 pm. Pause. Once more into the air at 6:47 pm and done by 6:49 pm. At it again at 6:50 pm and by 6:52 pm…… silence. By 7:00 pm, the exhausted woodcock had called it a night. By now it was quite dark except for the brilliant moonlight. He needed a good rest to be ready to perform before the sun rose the next morning. Nearly 30 minutes of non-stop display, and I figure at least 10 full-blown ground and flight cycles. Never glimpsed him. I hope he finds a beautiful damsel for all the work he did.

If you want to know more, check out www.ruffedgrousesociety.org/Woodcock-Facts. 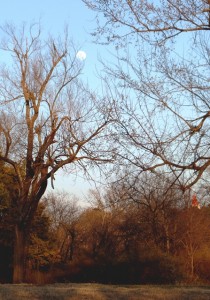