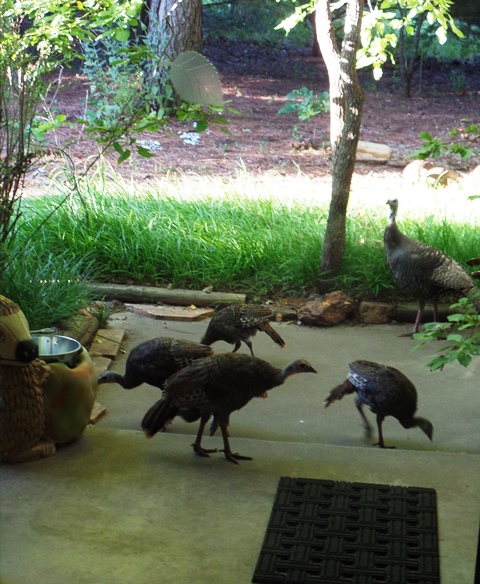 Turkeys at the door

The young turkeys are growing. The mixed group ambles up from the south, walks down the porch, along the sidewalk, around the house and goes straight out to scratch the remnants under the bird feeders.

Speaking of birds, this morning was bird day. I drove to Prague Lake to meet the kids and their sponsors from the Prague United Methodist Church. Until last week, I didn’t even know Prague had this 400 acre body of water with an extended hiking trail around it. The trail crosses a few creek beds, traverses some wooded areas and goes across the dam. Notice I was referring to the trail, not us. The downhill descent through thick, gummy, slick red clay convinced several in our group they had gone as far as they wanted, and soon the entire group had returned back to the trailhead. After washing the sticky clay off our shoes and ankles, we decided to walk along the edge of the lake on the paved road.

Each day this week the Methodist youth will be exposed to a different field in biology. Yesterday they collected leaves and identified plants, today was all about birds, tomorrow is fishing, on Thursday the OSU Insect Adventure visits and Friday will be skulls and skins. How exciting.

What made today great was the weird weather. All the way to Prague I drove in rain. During the morning thunder rumbled in the distance and light rain fell, but the temperature was surprisingly pleasant. We saw some cool birds. Young purple martins were hanging out on the wire, cardinals sang loudly and periodically streaked through the air, while a juvenile blue heron took off and flew across the lake. That was an ooh and aah moment. A cooperative red-bellied woodpecker flew to the top of a light pole where everyone could see it. To the side of the boat ramp were several 5 gallon buckets full of sand into which were inserted thick bent yellow rods adorned with blunt-ended spikes. Was this a new artistic feature at Prague Lake? When the rain became persistent, we all retreated to the pavilion and looked at feathers and practiced with fake beaks.

Different species of birds have bills adapted for food and lifestyle. To demonstrate this effect, clothespins, small spoons and straws were used as substitute bird beaks. Cut-up marshmallows, raisins, jelly beans and popcorn became bird food. Although the straw was an imitation hummingbird bill designed to slurp up nectar, it was amazing how one kid bird could suck up so many raisins with his “beak.” The marshmallows made excellent worms deftly picked up by the clothespins, and the popcorn “seeds” were spooned up or clasped and made easy progress into the kid bird mouths. The kid birds were still hungry after their feeding event. It was time for one more trip to the lake’s edge.

A most interesting thing happened while we walked back down to Prague Lake. A state park truck towing a pontoon boat drove into the park area, followed by another state truck. In the back of each truck were more containers of large twisted spikes, both in yellow and black. Quite curious, we walked to the water’s edge just in time to see the pontoon boat zero in on an area, but had to leave before the artificial fish habitats , we surmised, were lowered into the shallow lake. They use old cars at Lake Wister. Then again, perhaps the metal limbs were a deterrent to prevent boats from getting into fish nursery areas. I would say it would give places of interest for scuba divers to visit, but they would have difficulty seeing the structures in the murky water and probably scrape bottom trying to get to them.

The kid birds and their sponsors climbed into their church van to return to town. I took off in the other direction. The turkeys came by later for a snack.

This entry was posted in Uncategorized, Wildlife. Bookmark the permalink.
Logging In...